A Road Through History 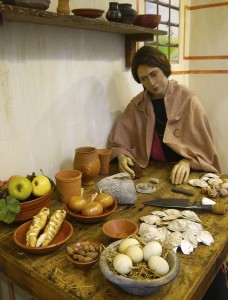 Towcester Museum comes to life through three interactive exhibitions sponsored by the Heritage Lottery Fund taking you on a ‘journey through time’ spanning 5,000 years of Towcester’s history. The road – ‘Watling Street’ – has played a major role in the development of Towcester and has fulfilled many functions over the centuries, serving as a highway for military settlements, an ‘international border’ and a major coaching route. By visiting these exhibitions you will gain a deeper appreciation of the everyday experiences of people who lived in Towcester and understand how the town developed and evolved over the centuries. The first exhibition of our trilogy starts you off on a time-line through history from the Stone Age through to the Fall of the Roman Empire. The second exhibition allows you to continue the journey from the Anglo-Saxon period through to the Great Fire of Towcester in 1676. The third and final exhibition of ‘The Road Through History’ focuses on the Georgian, Victorian and Twentieth Century periods of the town’s history.

This first exhibition on ‘The Road Through History’, sponsored by the Heritage Lottery Fund, traces the origins of Towcester from the Stone Age through the Bronze and Iron Ages right to the end of the Roman occupation. When you visit you will be able to discover more about significant events in Towcester’s past including when the first people settled in Towcester, the dramatic changes brought by the arrival of the Romans and the Boudicca uprising against the Romans. 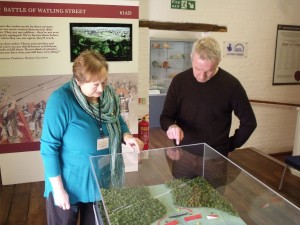 The exhibition contains an exciting series of displays telling the story including:

If you would like to learn more about the defeat of Boudicca’s rebellion in 61 AD then download The Defeat of Boudicca’s Rebellion. This fascinating book, written by local military historian Martin Marix-Evans, explains his theory that the battle took place just south of Towcester at Cuttle Mill and also includes a guide to public footpaths that visitors can use to see the site for themselves.

Continue the ‘Road through History’ with our second stage to the exhibition, sponsored by the Heritage Lottery Fund. This exhibition continues the story from the end of Roman Empire through the Anglo Saxon, Norman, Medieval eras to the Civil War and the Great Fire of Towcester. You can learn more about key characters from Towcester’s past including, Archdeacon William Sponne and the infamous Sir Richard Empson, and find out more about all the Civil War battles and skirmishes that took place in the area around Towcester.

The third exhibition completes the ‘Road Through History’ trilogy, sponsored by the Heritage Lottery Fund, and tells the history of Towcester spanning over 5,000 years. The most recent part of the exhibition focuses on the Georgian, Victorian and Twentieth Century periods of the town’s history. This exhibition will allow you to learn about some of Towcester’s heroes of World War One and World War Two, gain an insight into the life of a Georgian coaching town, and for the first time experience the 5,000 years of Towcester’s history in one exhibition.

‘Towcester Goes to War’ is a new exhibition at the museum which celebrates Towcester’s contribution to the Great War. The exhibition, which is funded by the Heritage Lottery Fund, tells the forgotten stories of Towcester’s past through the eyes of those who went before us, many of whom fought and died for our country. Among the items on display are original weapons, gas masks, medals, letters, keepsakes and more. 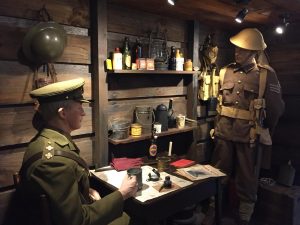 We’re a family friendly museum with lots for the kids to do too! We are very grateful to the Heritage Lottery Fund for their support.